Editing "Valleylon", the second in the Shooting Star series.

Blue breakers on the white beach.
It could be worse, thought Paean as she woke up to Savvalon’s deepening dusk. Metal prison planet, for instance. Or, cold deck with Hydras. Or, chained up on Federi’s bunk…
She sat up and noticed the violin case next to her. With a short note, written by Virian into the sand.
“Brought you this,” it read. “Can’t hang around, duties waiting, sorry, my human sister. I’ll be visiting you, a lot. Vir.”
That was fine. Paean opened her violin case and plucked pensively over the strings. The beautiful instrument was in good condition despite all the space travel. This spoke volumes for the equalizing systems on all Earth’s space structures, especially the Shooting Star and the Comet.
Her gaze fell on her ankle, where the pretty silver chain still hung that Federi had given her. “To remember whose side you are on,” he had said. Not a true gift; a hateful chain, a handcuff. She ripped it off and launched it into the waves. She didn’t want to think of Federi now.
“Hello, my new planet,” she said to the world around her, then stashed her violin safely in the Comet and made herself a sandwich, took it out onto the beach and ate it, gazing over the sea.
She had missed this. She watched the birds that coursed over the waves, catching fish – or, she’d better presume it was fish, she thought. Birds? She dug her mini-binocs out of her moonbag – nearly burning her fingers on that moonbag, she’d have to find something else to carry things around in – and trained them on those birdies.
They looked like large seagulls. But dusky-grey, and a bit more robust, with the wing-body shape nearly a triangle like in a pterodactyl. And their beaks had teeth.
They danced over the waves like bats! She trained her spyglass on their catch. Gosh, those fish looked like dolphins! Weird place, this.
She made sure she was armed with her submachine gun, the Paean Special that F… that she had acquired while in the Solar Wind’s service. If one of those came a bit too close…
It would be nice to have a guitar of sorts right now, and a camp fire. She trailed around the beach vegetation, finding dried-out twigs and vines, and a single medium-sized branch that had washed up. It was bleached and dried out, typical driftwood. She piled everything into a heap and set a light to it using her laser pen and her binoculars, the way F… the way she had learnt during her training.
Those Vaughhi had a few more surprises coming. She had primed Virian to keep her updated; and she had programmed S.I. Lina to find her way through space, through the portals in one of those mini space suits that Wolf had designed for the special issue croaches. So that she could send messages to those who did care, and find out what was happening to her planet.
But S.I. Lina was here with her, right now, sitting on her knee munching on a crumb Paean had placed there for her. The little croach was loaded. She’d taken a load with her. Who the sire was, was a mystery, as all special issues so far were female. Perhaps an ordinary roach, in which case Paean was in for a merry time. She rolled her eyes.
Well, she wasn’t going to sweat the small stuff right now. She picked up S.I. Lina, instructing her firmly not to offload in her pocket, put out the fire again to keep for later, and went to the Comet. Reconnaissance time.

The village was small and dusky. There was only one inn; and strangers were unheard of. Paean had her Unicate whip with her, and her spray bottle, and of course she could teleport simply by asking S.I. Lina. Her original teleporter and her wrist-com had been taken off her by F… that idiot who couldn’t even throw a Black Widow spider off the ship when he saw one. She had still been meaning to take revenge on that girl; but she’d ended up taking revenge on Federi himself. Because, if she had to be dead honest with herself, that was exactly what hanging out with a handsome young guy all day on her birthday had been about. Somehow, that thought acted like a fizzy cleaner tablet for her brain, removing the cobwebs and confusion. That had been the crux of the matter.
She’d kiss him again, damn that. Her mind ran to the handsome young Vaughn and she envisioned it; and felt the stab of anger and revenge that accompanied that imagined kiss. No. It wouldn’t be fair to Galamer, because it wasn’t for him. Nobody would ever be able to replace… scratch that thought, she told herself angrily. She was heartbroken now; but it would fade. And nobody would make a concubine out of her!
Paean walked through the streets on her comfy deck sneakers, silent as only a gypsy could. She observed the Vaughhi in their dusk-time activities; here a mother was taking clothes off a line, there, some people – elderly or a young couple, she couldn’t tell – sat peacefully on a bench talking softly. No moozling going on anywhere at all. No slaves in view, either.
She’d have to stepwise replace every item Federi had organized her, with an item she picked for herself. She’d eventually throw them all into a box, to open only once a year if she was feeling sentimental. And even that would fade away. She had, after all, worked on the Solar Wind, exchanging fair work for pay; and she’d also been lucky and found a shipwreck, most of which treasure was still stuck in that squat chest of drawers in the Captain’s Cabin of the Shooting Star. That should fetch a pretty price anywhere. But most importantly she could play gigs. If she really needed money. She had other skills; surviving in the wild, for instance. And helping people not die from injuries. Opening portals and closing them down, awakening planetary hearts. Speaking Intergalactic Common. If she thought about it, a career in high politics here on Valleylon… but she’d be too visible. Galamer would find her and return her to Earth.
A Vaughn addressed her in that bird-language. She listened with all her telepathy, but failed. That was a problem.
Sorry, I can’t understand you, she called in Intergalactic Common. Do you speak Earth?
“You’re human,” exclaimed the Vaughn. “Poor lost little slave! What are you doing here?”
“Not a slave,” muttered Paean, her hand clamping around her dart gun. With her valeriensis in it.
“How did you get to Savvalon?” asked the Vaughn and beckoned her closer. “We don’t keep humans here! What happened? Were you left behind on your master’s vacation?”
Paean wondered if coming to the town had been such a great idea. She touched S.I. Lina, ready to teleport away.
“I’m Paean Donegal,” she introduced herself. Perhaps if the village could get to know her, it wouldn’t be such an issue.

Exclusively for readers of THIS blog: 100% discount coupon on Arcana

I want to see how many people who read this blog, like free ebooks.

So here is a discount coupon exclusively for this blog, valid until 23 September (that's my baby's birthday), giving you 100% discount on the urban fantasy "Arcana".

The Light Path; the Dark Path. 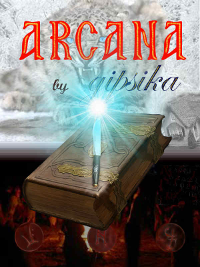 When Ivy Pennington, a sensible, intelligent young woman, plummets head-first into the occult, her biggest problem is trying to explain that she is simply not interested. Soon the storms of dark magic rage around her. She has a teenager to protect; a family member to dodge; a lot of explaining to do, to both her boss and the police. And sometimes it's easier to flick a careless little spell than try a lot of explanations.

But what will these little spells end up costing her? As Ivy tries to stay one step ahead of the dark path crowd and their underworld horrors, she learns a few harsh life lessons about what one sends out, coming back threefold.

A fast-paced read peppered with humour, deadly intrigues, magical khazam and a bit of romance.