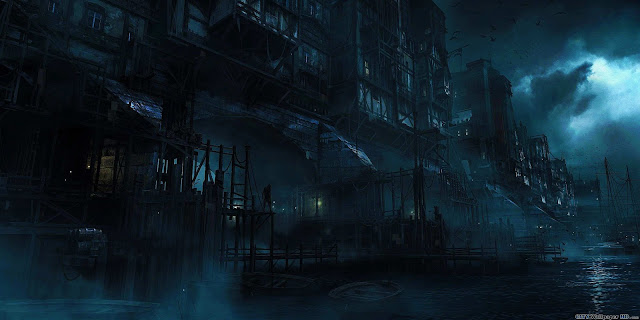 Running. No: Scurrying, like rats, cutting corners, slipping and scrambling through the half-dark of the dank storm drainage system of the old harbour town. Her older brother chasing her on from behind, her younger one scouting ahead, furtively checking each corner before they reached it, to make sure it was clear.
In a twisted way she was glad that she had cropped her hair short into an extreme brush cut, because the glorious red mane of curls she still had yesterday would have been in a hopeless mess by now. Her face, hands and clothes were streaked with mud, reeking of rat droppings and cat urine. She clung to her violin case and Ronan’s guitar bag, as he had more than enough to carry with his Clarsach and the heavy backpack.
Shawn, who was lugging the pipes under his arm as he peered around bends, beckoned for them to proceed. The next corner was clear. They ought to be right under the old promenade by now, and they had to be careful, because their tunnel was half visible to the streets from here, through fairly large storm drains. Dawn hadn’t finished breaking yet. Breaking what, she thought dismally. Breaking her whole life, everything she’d ever cherished. Breaking her childhood off with a deadly finality.
It had taken both Ronan and Shawney to get her pulled away from Mother’s body, her hands still covered in blood. What insanity was this? Why not leave her there, to die too when the Unicate came knocking on the door?
Lying low at Mrs Flanagan’s had been gruelling; but not as bad as spending the night down here in the drains. And as for the reaction of relatives, yesterday morning – she didn’t even want to go there. And through it all she couldn’t get the blood off her hands. What was driving her by now, was nothing but primal fear.
“Here!” Shawney’s signal was barely more than a whisper. She allowed Ronan to push past her, and found a way to hold the Clarsach for him too as he helped Shawn work on that manhole lid. They battled with it a bit. Rain and mud had sucked it into place and it was a struggle loosening it, but suddenly it lifted, and they pushed it aside.
All three waited and listened with bated breath, ready to bolt back into the depths of the storm drain system if they had to. Things seemed really silent up there. Ronan made a step ladder with his hands for Shawn, who put his foot into it and pushed himself up, peering out of the manhole.
“Coast’s clear,” he whispered down to his two sibs. Ronan boosted him up, then handed the instruments up to him. It was a tight fit for the Clarsach; but this square manhole was one they had tested before. Life for a young Dublin musician could be perilous at night.
“C’mon, Pae!” came Shawn’s optimistic invitation.
She shook her head, unable to face the scant daylight.
“Sis, we’ve been there,” said Ronan, almost threateningly.
Paean Donegal backed down and accepted the burglar-lift up to ground level from her older brother. Once she was out, she turned around and took the backpack from him. It took her and Shawn’s joint efforts to get that heavy pack lifted out.
She lay down on the pavement and extended a hand down for Ronan; Shawn did the same on the other side of the manhole. Ronan grabbed both hands at the wrist in a mountaineer’s grip and hauled himself out of the sewers, kicking against the crumbling stepladder none of them had dared to use.
All three pushed the lid back into place and stared at each other. So far so good; they were at the docks. They scanned the surrounds. Those uniforms could come breaking out of any alley, at any moment. They were not safe anywhere in plain sight.
An unkempt-looking character was idly leaning against a lamp post, watching them. It looked like a wild man, long black frizzy hair tied down around the head with a bandanna. One thing this person was decidedly not: Any kind of Unicate. There was something... he somehow looked like a sea person to Paean. On a hunch she stormed at the man.
“Sir, sir, please – are you a sailor?”
Gypsy eyes stretched wide in surprise as he took in her filthy appearance. He studied her intensely, making her wonder whether it had been a mistake talking to him at all. If he alerted the harbour guard?
“Looking for a ship to stow away?” he asked eventually with an unreadable grin.
“No, sir! We want to work! We’re hard workers, have been all our lives.” She hoped desperately he’d accept that. She was fifteen – work was only legal once you were sixteen. But he didn’t look like the type that would care.
Critical dark eyes noted the instruments.
“Musicians, huh? Shukar! This way, shey.”
“Paean, what are you doing?” hissed Shawn.
“Getting us a job,” she replied. “On a ship.”
“She’s right, Shawn, move!” urged Ronan.
The wild man led the way, along the docks to a beautiful white tall ship lying at anchor. Paean noticed that he moved like a predator; a feral cat or a burglar. But damn, the three of them didn’t exactly arrive smelling of roses, either.
The name on the side of the two-master sailing ship, she noted as they approached, was the ‘San Diego’. And the figurehead was a mermaid... its eyes seemed to follow them.
* 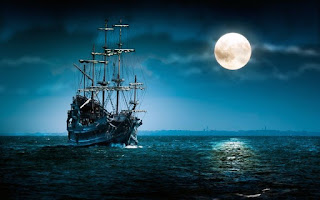 Loud banging on the white-painted door that was splintering with age. Louder banging. And an impatient grip on the door handle, forcing it.
The old lock gave way. The door swung inwards. The uniformed crew entered, with guns lifted high. Not stun guns; real fire. The little house was quiet. Too quiet.
They made their cautious way through the rooms, first the tight living-cum-dining room, the ridiculously short passage where three bedrooms and a bathroom connected; pushed the only closed door open, lifted their firearms -
“Check the other rooms! Check the bathroom! All the windows!” The young charge-sergeant personally looked under the bed. There was nothing; as opposed to what was on the bed.
So she was dead. He checked the pulse of the woman lying there drenched in her own blood. Accurate. Then where were the three?
“They’re not here, sir.”
Damn.

“They’re gone!”
The man in grey faced his equally grey officer’s wrath.
“How did you let them get away? They are dangerous!”
“We don’t know, Captain-Major. Technically there should have been no opportunity for them to escape. We were watching them this whole past week.”
“Find them!”
“Yes, Captain-Major!”

Tights. Toothbrush. Transmitter. Tarot deck.
The girl smoothed down her sleek black hair and threw a sidelong look at herself in the narrow hallway mirror as she left the apartment. Check. Still myself. No parsley between teeth. No beauty. No big deal. She glanced back at the empty flat she left behind; all traces of her erased, as though the only thing that had dwelt here between the last tenant and now had been time. Home? No. No such a thing. Wherever she was sent, there she went.
This assignment had her excited. She had never worked on a ship before. She almost smiled as she slunk down to the harbour.

Paean was standing indecisively in the hatch of a petite, minute, tiny cabin. It had everything she needed; a pull-down bunk that came out of the wall; a round porthole with blinds – those were important; and a small, squat chest for her belongings. Neo-compounding, of course. Ronan and Shawn had been assigned a similarly small cubicle, with the two bunks pulling out of the wall one above the other.
Ronan came in and unceremoniously dumped the clothes he’d packed for her, on her bunk.
“Freshen up, sis. Don’t want to present like street kids, now do we?”
She shook her head, still unfamiliar with the missing mane, and the way there were no curls to move around her shoulders but only a stark crew cut.
“Where are the bathrooms?”
He took her out of her cabin and pointed down the passage. “They call them the heads, like, on a ship, alright? We’d better wise up on the jargon, sis.”
She nodded, gathered up a fresh set of jeans and t-shirt and padded to the ‘heads’ to get cleaned up. The heavens knew, the blood she had tried to wash off her hands for a day now was bothering her a hundred times more than the foul-smelling gutter-mud.

Two ships converge in the twilight, six hundred sea miles off Dakar. A voice calls across from one to the other. A chorus of powerful African voices answers. The national hymn of Southern Free.
Sails are furled. The two ships slow and come to a halt next to each other. Lines shoot across. A gangway extends from the blue yacht to the white trader. Muscular sailors carry goods across: Guns, heavy artillery. Closed boxes.
White teeth flash in laughter. Lines are untied, sails unfurled, the gangway retracted. The two ships veer apart, the crew of the yacht singing loudly. A pirate flag flies from the mast of the white trader. They disappear into the twilight in opposite directions, six hundred sea miles off Dakar...

“Don’t know what you dragged aboard there, Federi!”
The gypsy flashed a steely grin, gazing out over the harbour. “Jon, watch these sports.” He pointed at the docks. A pointless sun was rising behind a drizzly cloud cover. A Unicate patrol emerged from the ancient, narrow roads, stepping in perfect synchrony with hair-raising precision. You only heard one single marching gait. And they were headed straight for the ship.
Jon Marsden glanced over his shoulder, at the bridge. Yes, Captain also saw that patrol. He gave Federi a nod and they undid the mooring hawsers, which spun back into their holds. Captain raised the anchor. The ship started moving innocently away from the docks, gliding on solar drives.
The patrol increased its pace. Marsden glanced at the bridge and received a go-ahead signal from his Captain. Together, he and Federi peeled the neo-membrane with the false name off the side of the ship. He glanced back to the bridge. His Captain was grinning broadly. They all three watched how shock and disbelief spread over the faces of the Unicate civic military. The ship’s sails clapped like thunder as they expanded. The Solar Wind cleared the port and moved out into the Irish Sea, picking up speed, sailing close to the wind.
* 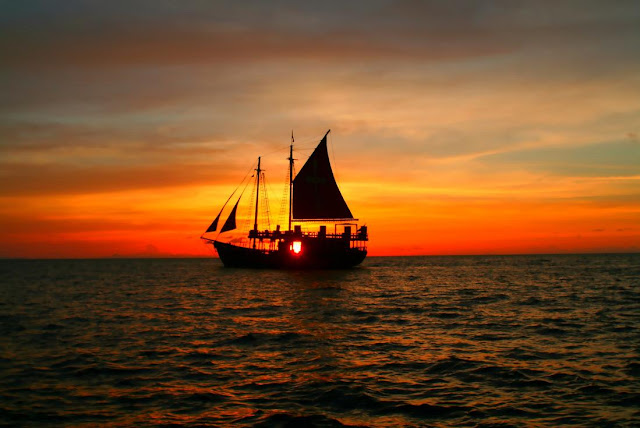 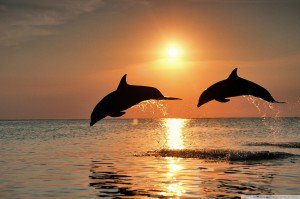 This is of course the opening chapter of the Solar Wind series, available at this link: