First of a series: Free

So Smashwords has this concept - put the first of a series out there for free to build readership.  I've been playing with that idea for a long time because - well, let's say I'm disappointed with the trickle.  If it were more of a stream I'd probably think twice of throwing that away.

Pros and cons for putting out the first one for free are still the same - people tend to think that if something's for free it is worthless.  Will they put down money for the second in the series, or will they wait for it to become free too?  ('snot gonna happen, fenfriends!)

Then again, Smashwords has this sensible way of throwing their stats at you - brilliant move, Mark Coker, and btw many thanks for the personal attention when I got stuck with formatting!  And here are they:

65%.  You see, I can remember figures.  65% of their bestselling series have a free first volume.  And:  Putting out an ebook for free is a fantastic way to build a readership.

I tried it with P'kaboo, but perhaps, perhaps, P'kaboo simply doesn't get quite as many clicks as Smashwords.  So here's to a fresh start.  I'm putting out the Solar Wind 1 ("The Mystery of the Solar Wind") on Smashwords for free for 1000 downloads, just to see what happens to the rest of the series.

Then of course he also mentions the WOW factor.  (Did he have to?)  Only a book that will absolutely addict its reader will have them take out money for the sequel.  Well, we'll see what stuff SW1 is made of...  Otherwise, I'll have to wait until I'm ready with the Shooting Star series and start putting out the first of that for free and see if that works better. 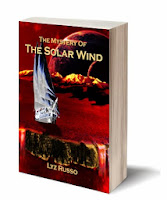 Here's to luck!  (Nobody knows what sells a book - except, Smashwords do seem to know, via observation!)
Posted by kalinka1 at 10:39 AM